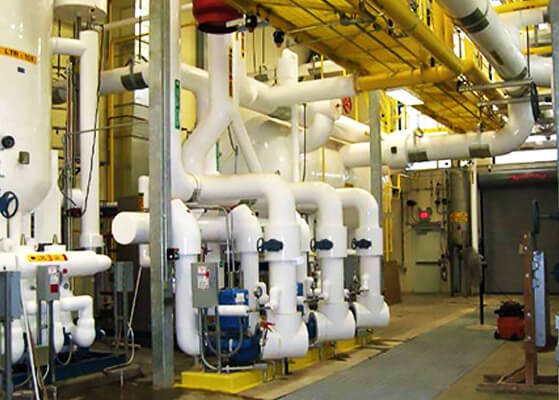 Shambaugh was awarded the construction of a 1,700-ton refrigeration system that employed the use of both Anhydrous Ammonia (NH3) and Carbon Dioxide (CO2) refrigerants.

While both refrigerants are commonly used in Europe for industrial cooling, one of the chemical compounds, carbon dioxide, is not widely used in the United States for a variety of reasons (lack of familiarity with designers/contractors, lower energy costs, special requirements dictated due to the high pressures exerted by CO2, and limited equipment availability).

However, unlike many halocarbon refrigerants, since both are naturally occurring compounds, they have zero ozone depletion potential (ODP).

The advantages of the system design included a reduction in the amount of anhydrous ammonia required (which is both toxic and corrosive), isolation of the NH3 to the engine room, (away from production employees) and increased energy efficiency due to the excellent heat transfer capability of CO2.

The anhydrous ammonia was used with the traditional vapor compression cooling method utilizing industrial screw compressors and flooded S&T evaporators. These heat exchangers cooled the CO2, which was then circulated as a secondary refrigerant directly to the process blast freezer fan coil units.

A CO2 vaporizer system utilized waste heat from the ammonia discharge circuit to warm the CO2 for use in defrosting the low temperature (–50°F) blast coils. Other energy reducing features of the system included the use of variable speed drives (VSD) on each compressor suction level and the condenser fans.

Induced draft style condensers were used for additional efficiency. In both the ammonia and carbon dioxide systems, hermetic pumps were used to eliminate any leak potential and loss of refrigerant. Stainless steel piping was used on the low temperature refrigeration loop due to the high pressures exerted by the CO2 refrigerant.