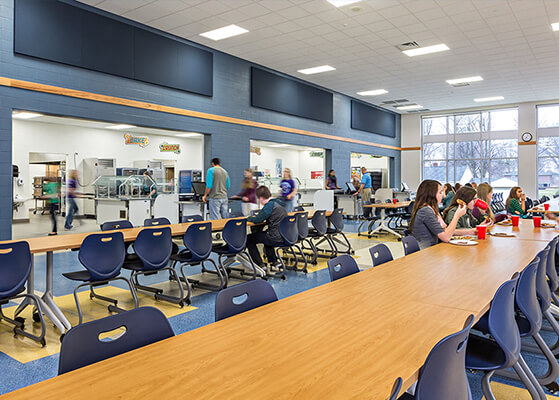 Shambaugh & Son is honored to have been on the Design-Build team selected to perform the mechanical, plumbing, temperature controls, electrical, security, communications and fire protection design and construction for the $32 million, 152,000 sf Crawfordsville Middle School. Because the school was built in an established neighborhood on the same property (6.2 acres) as the original which opened in 1960 and within some of the same footprint, the building was constructed in two phases. The first phase was built next to the existing building and would house the two story academic wing. The second phase would be constructed only after the first phase was completed and the existing building was demolished, all while school was in session in the new academic wing. The second phase consisted of the support areas—administration, cafeteria, large instructional (LGI), two gymnasiums, wrestling room, concession area and locker rooms.

Build a state-of-the-art educational facility to last over 40 years with the intent to provide support for academic success, character education, and development and parental and community involvement.

Rooms and areas are independently controlled thus allowing each to heat or cool depending on immediate need. Overall design exceeds ASHRAE 90.1 by over 20%. Once completed, the building will be one of the most efficient in the Crawfordsville School District and will achieve Energy Star certification.