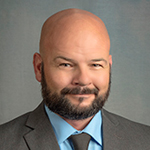 Craig assists, plans, and implements safety policies and procedures in compliance with company, customer, local, state, and federal rules and regulations, including those mandated by OSHA. He is normally stationed on large projects throughout the U.S., overseeing the safety of site contractors.

Craig has nearly 18 years of experience in the construction field. Prior to joining Shambaugh in 2013, Craig spent eight years as a Journeyman Carpenter traveling the U.S. and building salt and fertilizer domes for the Department of Transportation and the Federal Government.

In 2008, Craig began his safety career as a Site Safety Manager and spent five years working at a major chemical manufacturer. In this role, Craig gained valuable experience working in the fast-paced chemical facilities world, where he wrote site-specific safety plans and oversaw critical lifts made by cranes and helicopters. He also oversaw chemical abatement procedures, lock-out/tag-out procedures (LOTO), and incident investigations.

Craig and his wife have two children. Craig enjoys spending time with his family and friends, as well as blacksmithing, woodworking, and the great outdoors.